Since the initial outbreak of SARS-Cov-2 in late 2019, there have been many infection prevention and control (IPC) measures and protocols implemented, citing protection from the virus for clinicians and patients alike. For many frontline workers, often inquisitive as to the rationale behind some of these measures, the evidence-base referenced by in-house officials is often a third-party recommendation, based upon previous similar outbreaks or poorly researched ‘best-practice’. Mistrust in apron use, general fatigue of compliance over time and personal experiences of individual wearers can all affect their usage.

The author carried out a literature review using multiple sources, including medical journals and national guidelines found via database searches, such as Medline, CINAHL and Google Scholar. Keywords used were COVID-19, PPE, Aprons, Aerosols, Transmission and AGP (aerosol-generating procedure). There were a few themes found during this review, such as clothing as a mode of transmission, classification of an AGP, viral load and a need for further up-to-date research in key areas. This brief comment based on the author's review of the literature surrounding SARS-Cov-2 (the virus responsible for COVID-19) focuses on the evidence base for donning single-use plastic aprons as well as other forms of personal protective equipment (PPE) and relevant IPC measures. In examining the benefits and disadvantages of single-use plastic aprons and other COVID-19 PPE by looking into how the virus transmits and infects, as well as the potential efficacy with which aprons impact on the ‘chain of infection’, the author suggests that the wearing of plastic aprons with COVID-19 positive patients may be unjustified, provided the patient is wearing a facemask.

How is SARS-Cov-2 spread?

‘A healthcare-associated infection is a problem which develops as a direct result of healthcare interventions for example, medical or surgical treatment, or as a result of direct contact with a healthcare setting’ (National Institute of Health and Care Excellence (NICE), 2019).

Preventing patients or other members of staff from acquiring an infection in the healthcare environment is a fundamental part of routine work and is often robustly policed. Evidence regarding COVID-19 strongly supports the use of simple facemasks to help reduce the spread of possibly contagious vehicles of transmission, which may then infect other individuals or contaminate surfaces (Javid et al, 2020).

This is further supported by Islam et al (2020), who state that nosocomial transmission of SARS-CoV-2 in healthcare settings occurs through droplets, aerosols, and the oral-faecal or faecal-droplet route. Similarly, guidance from Loveday et al (2014) stipulates that sometimes patients may be encouraged to use surgical facemasks to prevent expulsion of respiratory droplets into the environment. According to the European Centre for Disease Prevention and Control (2021), the primary mode of transmission of human coronaviruses, like the SARS-CoV-2 virus, is through respiratory particles generated by individuals when breathing, sneezing, or coughing. Preventing or inhibiting this mode of transmission theoretically reduces the likelihood of subsequent transmission and infection.

Facemasks are described by the World Health Organization (WHO) (2020a) as an important method of IPC, which Zhang et al (2020) also supports, stressing that respiratory-particle transmission is the dominant route. They continue that other mitigating measures like social distancing alone are not as effective. But ‘…there is growing evidence that…the transmission of SARS-CoV-2 via aerosols is plausible under favourable conditions, particularly in relatively confined settings with poor ventilation and long duration exposure to high concentrations of aerosols…especially in closed indoor settings’ (Tang et al, 2020; Zhang et al, 2020). WHO (2020b) defines droplets as ≥5–10 μm diameter and aerosols as <5 μm, a threshold which is commonly used to dichotomise aerosol and droplet transmission, although there is some evidence of particles up to 50 µm being captured by inspiratory airflows (Wilson et al, 2020). Wilson et al (2020) also identified that in small retrospective studies of the 2003 SARS epidemic, the evidence cited to suggest that AGPs were linked with increased risk of transmission was ‘…casual…’ and ‘…misused…’. They go on to explain that during that time, on average, more nursing staff were infected than doctors who were performing AGPs, suggesting that proximity with the infected and time exposed to patients with respiratory distress are more robust determinants of risk than the procedures traditionally considered as AGP. Brown et al (2020) found a lack of quantitative evidence on the number and size of airborne particles produced during AGPs to suitably inform risk assessments. Also, the study itself did not support the describing of elective tracheal intubation as AGPs because ‘…the average concentration of particles recorded during the intubation period of the study was 500-fold lower than the mean (SD) concentration recorded during volitional coughs’. In the case of the prehospital environment, this would be emergency rather than elective tracheal intubation, which may affect how this literature is interpreted. Nonetheless, these results may draw attention to these comparable values and perhaps their related infection risks to individuals. This point was referenced by Tang et al (2020), pertaining to a collection of studies investigating seasonal human coronaviruses which had detected exhaled aerosols, supporting the possibility of aerosol transmission through tidal breathing, in the absence of coughing. 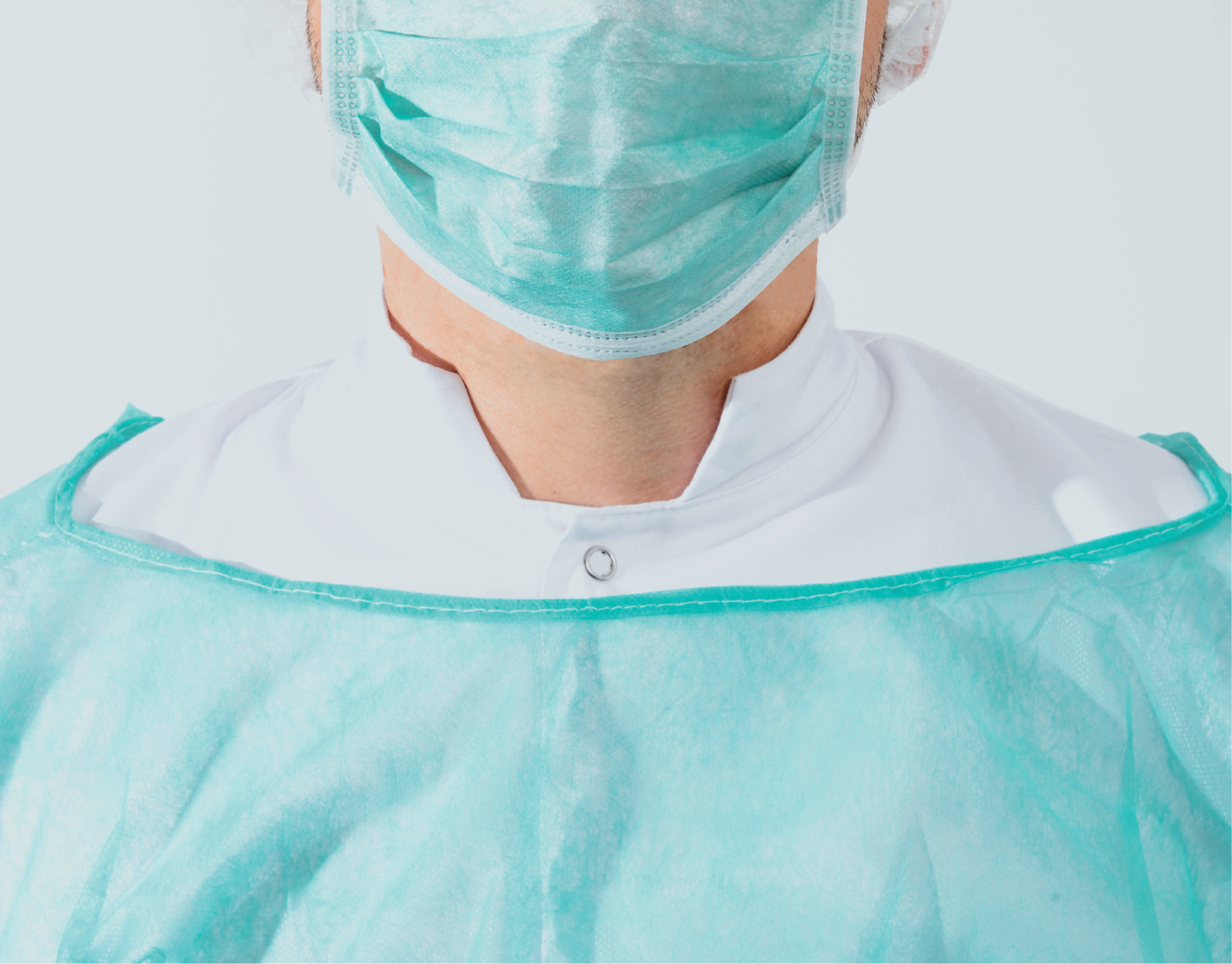 Despite evidence that COVID-19 is primarily an inhaled virus, or transmitted via touch to mucous membranes, plastic aprons have received significant emphasis as part of routine personal protective equipment during the current pandemic

Despite evidence suggesting that COVID-19 is primarily and predominantly an inhaled virus, or transmitted via touch to mucous membranes, plastic aprons have received significant emphasis as part of routine PPE use specific to the outbreak. Loveday et al (2014) recommends that disposable plastic aprons are used for general clinical activities, when there is a risk of contamination with blood or body fluids. Their selections should be based on the following three factors:

However according to NICE (2019), there is no literature or research making specific mention of clothing or uniforms being capable of transmitting, or of ever having been observed transmitting, infectious components directly onto mucus membranes. While a lack of evidence does not necessarily indicate no association, it is equally difficult to justify policy implemented without it. Wilson et al (2007) also address the hypothesis that uniforms, or clothing could be a vehicle for the transmission of infections. However, they go on to state that this is not supported by existing evidence and that subsequent laundering contributes to the removal of any contaminants in between wearing. While an argument may be made for patient-to-patient transmission as laundering occurs between shifts rather than between patients, if patients are wearing facemasks, this is unlikely to be of concern. Verbeek et al (2020) found ‘… low-to very low-certainty…’ evidence that covering more parts of a clinician's body leads to better protection but does, on the other hand, contribute towards more difficult donning or doffing and decreased wearer comfort. While this does not compare transmission risk between donning an apron versus not, it could be considered a potential factor concerning compliance with PPE policies intended to prevent transmission. The study concluded that there is inconclusive evidence to support or refute the use of aprons and that more ‘real-life evidence’ is required.

Howard-Jones et al (2020) highlight that there has not yet been one case report of a healthcare worker infected through contaminated personal clothes worn travelling to and from the workplace. Howard-Jones et al go on to cite an article from Chin et al (2020), reporting that on cloth, the viral load decreased 100-fold after 30 minutes and was not detectable by day two; this is because SARS-CoV-2 is an enveloped RNA virus, like influenza, with poor stability on porous surfaces. This instability derives from disruption of the lipid envelope with minimal insult and from the innate nature of RNA, which readily degrades under environmental conditions. Single-use plastic aprons could potentially retain any larger contaminated droplets upon its surface, which may be easily transferable onto the next surface it meets.

In contrast with Guo et al (2014) and Hall et al (2018), waterproof gowns apparently showed less direct contamination when ‘doffing’; however, neither article was explicitly testing and comparing plastic aprons against gowns relating to COVID-19, so more research may be needed. English national guidance stipulates that in situations classified as AGPs, fluid-repellent coveralls should be donned (Public Health England, 2020); this advice has been maintained despite some studies as cited in this comment potentially demonstrating the comparably lower transmission rates between aspects of currently classified AGPs and coughing or tidal breathing. It would seem, that if it were true that clinicians' uniforms were a significant fomite for SARS-Cov-2, situations likely exposing individuals to higher viral loads would require full-body PPE.

Yet as the author has attempted to discover, the classification of procedures defined as AGPs could potentially require refinement. In the context of COVID-19, describing clothing as a significant reservoir for possible subsequent virus transmission may also be exaggerated. It could be interpreted that current guidance does not best reflect the evidence in its entirety. Table 1 identifies the basic, minimum level 2 protection advocated by different international health agencies, specifically for query or confirmed COVID-19 patients. It appears to show the prevalence of long-sleeve gowns as first-line PPE, with only Public Health England opting for single-use plastic aprons as standard, while the United States of America conversely does not recommend their use.

Type of apron or gown recommended as minimum PPE by organisation

This comment aimed to highlight the potential benefits and disadvantages of PPE used in healthcare pertaining to SARS-Cov-2, with particular focus on single-use plastic aprons. It identifies viral transmission and routes of infection, as well as the potential efficacy to which aprons impact on the ‘chain of infection’. There appears to be a potentially higher fomite-mediated transmission risk when compared to contact with a clinician's uniform, where droplet absorption into the fabric reduces transmission risk and also sees a subsequently decreasing viral load over time. These findings secondarily reinforced the scientific consensus surrounding facemasks, particularly as a more effective means of preventing transmission when compared to plastic aprons, given the virus' primary route of infection.

Perhaps an update to the definitions of AGPs may be appropriate with further research. It is positive that healthcare trusts take steps to protect staff. More research may be desirable to ensure that SARS-Cov-2 is not being spread unintentionally by staff while plastic aprons are being worn during patient care, and that the aprons themselves are financially worthwhile for the NHS. For paramedics and clinicians in the ambulance service, encouraging patients who are suspected of having a respiratory infection, such as COVID-19, to wear a facemask where possible should continue to be promoted. As for plastic aprons, clinicians should continue to follow their trust's policies on PPE for now, but the policies themselves may require a review, particularly for clinicians attending to a ‘non-COVID’ incident, where full level 2 PPE often remains protocol. It may also promote compliance if the current source evidence which indicates apron use be distributed to frontline staff.